Violin Strings made from... Spider Silk!

The strings of a violin (and viola, and cello) are today usually made from a synthetic core (typically nylon) wound on the outside with metal (usually steel, sometimes with aluminium and sometimes gold-plated). In the past, strings were made from "catgut", but not (despite the popular assumption) actually made from the intestines of cats. "Catgut" was in fact made from stretched and dried sheeps' intestines! 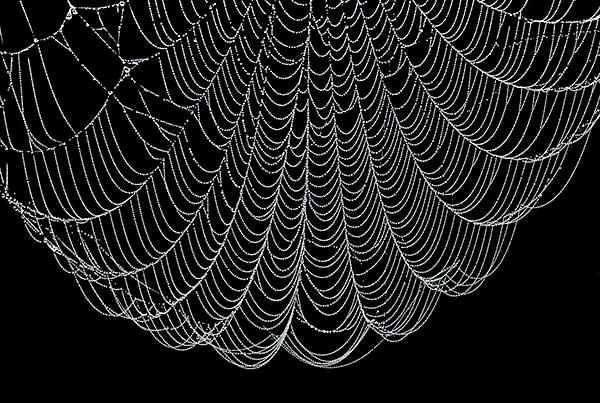 The web of an orb-weaver spider

The material from which strings are made can affect the sound – older "catgut" strings are much less loud than modern strings, require a lot of care and maintenance, and their tuning can be affected by temperature and humidity. However, their soft sound is very sought-after particularly for early music.

Modern strings last longer than gut strings, and will hold their pitch better in different environments, but their bright tone can sometimes make it difficult for the player to blend well with soft-toned instruments, particularly in a chamber music setting.

Now violin strings have been made from a radically different material: spider silk! It's claimed that this material (when woven in braids from many strands) is as strong as the metal-and-synthetic-core modern strings, but has the softness of tone for which gut strings are famed.

Don't worry, this isn't an early April Fool – the strings have really been made, by Shigeyoshi Osaki of Japan's Nara Medical University, who has been researching the mechanical properties of spider silk for many years. Clearly, it's difficult to produce spider silk in great quantities in an organised way, but Mr Osaki has developed a technique to harvest the 3000-5000 strands needed for a single violin string from the Golden Orb-Weaver spider, or to be more accurate, a frankly quite frightening 300 female orb spiders.

Rather than leave you with a creepy video of a spider, here's a slightly gory but fascinating video showing how "catgut" strings are made (which come from sheep intestines – so be warned, you'll see some on this video!)

The Clements Blog | Tim is the founder of Clements Theory and is a composer. More info at Tim Benjamin's website.

There are no comments yet. Be the first!